Last week I was on a business trip in Europe, visiting companies in Oslo, Paris, Madrid, and Cannes with additional stops in Frankfurt and Nice. Yeah, I know - rough duty. I can't complain too much about that list, but visiting 7 companies in 4 cities in 3 countries in 5 days is hectic even if the food is (sometimes) good. Sometimes it's potato chips and water while rushing to the next appointment - not a very European lunch, but I'm flexible. Here are some non-proprietary highlights. 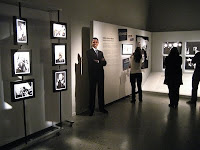 Oslo - This was my first visit to Oslo and I had a few hours to walk around on Sunday afternoon when I arrived. I visited the amazing Vigeland Park sculpture garden. Sculptor Vigeland was an obsessed with the nude human form and there are some 200 sculptures in that park to prove it. I also visited the Nobel Peace Center, where on October 4, I took the picture at the left. Aren't you a little suspicious of that life-size cutout of President Obama at the Nobel Peace Center five days before the Nobel Peace Prize was awarded to him? Actually it was a civil rights history exhibit called "From King to Obama."

Paris - Paris is nice even on a brief visit (evening arrival and dinner, then two customer visits the next day before flying to Madrid), even if you have only an average cafe meal for dinner. Average in Paris beats "great" in many cities. But it was a quick visit. 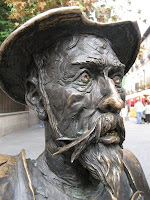 Madrid - Two full days of business, but we managed to get a quick look at the Royal Palace of Aranjuez where we stopped at the gift shop to buy the aforementioned chips and bottled water for lunch. We had seven minutes and saw only part of the exterior, which is lovely. No time for the famous gardens. Later we had a few hours before a late evening flight to Nice, and we visited Alcala, a town known as the birthplace of Cervantes, famous author of Don Quixote. The museum was closed but there was a nice statue of Don Quixote in front and the annual Cervantes festival was just starting. The new terminal at the Madrid airport had an interesting reference to optics in its construction - the roof supports were painted in a continuous spectrum from deep blue at one end to red at the other. This is shown at the top of this post - two photos taken from different spots in the middle of the spectrum, one looking toward red, the other toward blue. Cool effect.

Nice and Cannes - We stayed one night in Nice (late arrival from Madrid) before driving Friday morning to Cannes. There we visited Thales Alenia Space, and although it was not the main reason for the visit, we got a chance to see some cleanrooms ("salle blanche" or "white room" in French) where some seven communication satellites were under construction (the Huygens Titan entry probe was assembled here, as were many other European space exploration satellites in addition to weather, communications, and Earth remote sensing satellites). We also saw a huge vacuum test chamber, the largest in Europe. No cameras allowed, so I grabbed the picture below from Thales Alenia Space's online multimedia library. 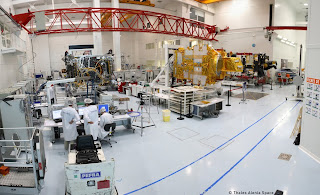 On Saturday I was able to visit a wonderful little island called Porquerolles, a short boat ride from the city of Hyères on the south coast of France (about midway between Marseille and Saint-Tropez). I spent several hours exploring the walking trails, beaches, and rocky shore areas before enjoying a lunch of mussels, frites, and a rosé wine made right on the island. 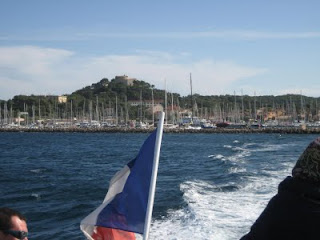 Then it was time to head back home via Paris and Frankfurt - I took this picture of Porquerolles just after takeoff from Toulon airport en route to Paris (many great Porquerolles photos here). 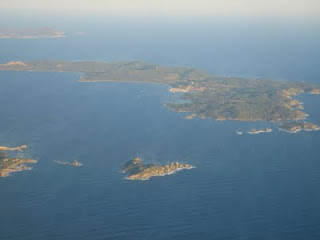 Now it's time to start reviewing Japanese for an upcoming trip to a different island...

Posted by FlyingSinger at 9:54 PM