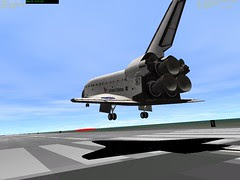 Space Expo 2008 at the New England Air Museum today was an excellent event, drawing over 1400 people. There were a lot of cool exhibits, and retired NASA astronaut Brian Duffy gave a great talk on his last mission, STS-92, then signed autographs for a long line of people. We got to set up our tables next to a bunch of classic airplanes including some of my favorite Grumman Iron (F6F Hellcat and F-14 Tomcat).

Although his autograph table was next to my table, I didn't get to meet Col. Duffy or show him Orbiter as I had hoped. We were both too busy. I had a long line of kids (and a few adults) waiting to try out Orbiter. While my original plan was to have them try final docking with the ISS, that proved to be too much to explain (thrusters, translation, rotation, closing velocity, joystick buttons, etc.). Instead I reverted to "land the space shuttle from short final." Kids seemed to like that and it only required explaining pitch, roll, HUD symbols, and flaring. The simulated Atlantis took quite a beating. There were a lot of KSC swamp landings (no alligators in Orbiter), a lot of comical bounced landings (the shuttle in Orbiter is remarkably elastic), and a few "greasers." I think at least 50 people tried it and perhaps learned something about space flight in the process. A number of Civil Air Patrol cadets helped out with my table and even gave some of the "flight instruction" so I could take a couple of breaks. I used to be a CAP cadet myself, back in the late sixties. I mentioned this to one cadet who gave me a look suggesting she didn't know they even had airplanes that long ago.

Kids and parents were surprised to hear that Orbiter is free and many took my info sheet and said they would download it. I explained that Orbiter was a lot more than shuttle landings, and I pointed to Tex's video "Apollo Remastered" which was running on a big screen, projected from my other PC. This video features the great AMSO Apollo add-on and provides a 10 minute version of Apollo 11 that shows off what is possible with Orbiter. I also ran AMSO scenarios (Apollo 11 launch and moon landing) for a presentation I did in the morning for a pretty good group of people in the museum's large meeting room. My presentation was billed as a Mars landing, but they didn't seem to mind my switching to the moon.
Posted by FlyingSinger at 8:15 PM