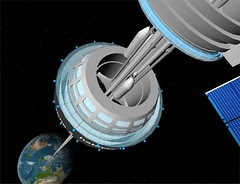 The carnival is back in town, once again hosted by Riding with Rockets. One of the many blog articles included is a brief overview of space elevators at New Frontiers, inspiring me to include this picture, which depicts a space elevator add-on for Orbiter. For some reason this is one of my most popular Orbiter screen shots on Flickr, viewed about 1,100 times (this Earth image is the most popular, 1,890 views).

It's also appropriate to show an "Arthur Clarke-style rigid pole space elevator" (as I noted in my Flickr caption), since the great science fiction novelist and space innovator Arthur C. Clarke died this week. His novel The Fountains of Paradise was one of the first to feature space elevators. Several posts in this week's carnival include tributes to this influential author, whose work helped to define many aspects of the space age in our imaginations, even for those who know him only through the great film 2001: A Space Odyssey which he wrote with director Stanley Kubrick.
Posted by FlyingSinger at 5:07 PM