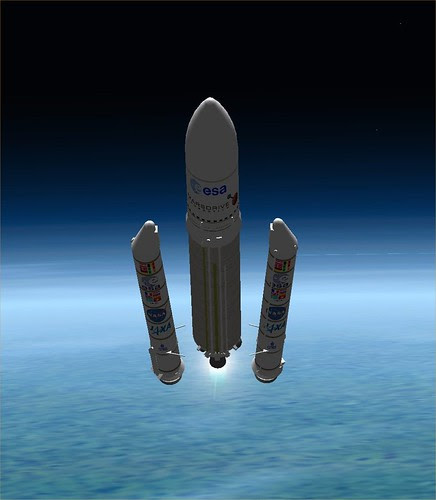 Although my personal "launch" to Paris was aborted by the nasty weather in the Northeast yesterday (I'll try again today), the launch of the ESA "Jules Verne" ATV cargo spacecraft was successful. It launched on an Ariane 5 spacecraft from the Kourou launch site in South America. I have launched a number of virtual Ariane 5's in Orbiter since this is the launch vehicle we use in the Mars for Less project to place the components of the Mars ships into Earth orbit as shown here.

The ATV will have to "loiter" in orbit for a while, performing various tests before docking with the ISS on April 3. In the meantime, the shuttle mission STS-123 (planned for launch on Tuesday) will have come and gone. The traffic up there is getting to be brutal.
Posted by FlyingSinger at 9:13 AM

I'm Gijs and I read you blog almost every day. I've even started to read some of the books you read.

I also noticed the ATV Jules Verne launch and made a small video about it on youtube using orbiter:
http://nl.youtube.com/watch?v=J19foBZ566A

Thanks for your blog!

Thanks for your visits and for commenting. The ATV video is quite nicely done. Where is the ATV add-on? I checked Mustard's site and avsim and I don't see it there.

Thanks, actually its contained in the CTV add-on.