Up Close and Personal with Enceladus 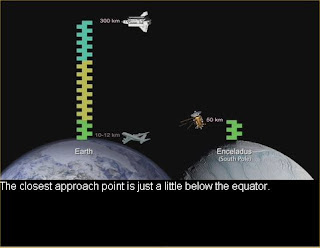 I got a press release from JPL saying that Cassini has recently detected evidence that Saturn's moon Rhea may itself have rings. That would be a first for a moon in our solar system. Pretty funky.

While at the JPL-Cassini site, I noticed a video about Cassini's upcoming March 12 flyby of another moon, Enceladus. This one really shows the confidence they have in the orbital mechanics and guidance systems with this veteran spacecraft. They will pass within 50 kilometers of the surface. That's a pretty close shave (the video frame here compares this to the shuttle's typical Earth orbit altitude of 300 km). Its goal: "To scoop up samples of water-ice particles and gas spewing from Old-Faithful-like geysers." The QuickTime movie is here (I don't know how to embed the JPL videos).
Posted by FlyingSinger at 3:46 PM