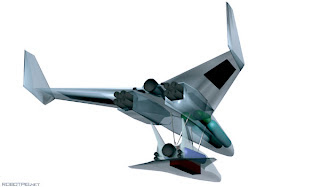 This is really cool. TSTO means "two stage to orbit," but these are not your regular two-stage rockets - they are space planes! The graphic shown here (from robotpig.net!) is based on a 1989 Boeing patent. The launch aircraft would be huge and would use multiple jet engines and a single SSME (space shuttle main engine) to get up to around 100,000 feet and Mach 3.3 where the orbiter would be swung out from below and dropped to continue its flight to orbit. The carrier plane would then head back to the airport to land.

Sure seems like the way to go if you want to do it every day and re-use everything, and pretty much all of this technology is off the shelf. Something like this may already have flown for the US military, but if so, it was top secret (the article shows some graphics on this too, read more in this 2006 AW&ST article). Thanks to Greg Burch for pointing out the robotpig article. 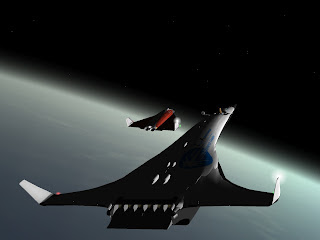 The closest thing we have to this in an Orbiter add-on is Kulch's TX winged space launcher. Similar idea, but the TX is able to achieve orbit on its own and carries its payload on its back. Shown here with a standard (for Orbiter) Deltaglider space plane having just separated in orbit. In addition, Greg Burch helped to create an alternate history add-on for Orbiter that has some similarities with the alleged "Blackstar" system. It's an orbit-capable "X-15 Delta" that would launch from atop a Mach 3 XB-70. It's really cool. I have a picture here.

P.S. I should have clicked one more link in Greg's post and/or remembered that he has done a number of futuristic Orbiter add-ons as well, including his aptly named BSP4.0 (Big Space Plane 4.0), which certainly resembles the Boeing TSTO design with the orbiter carried under the "booster" (carrier) aircraft. Very cool.
Posted by FlyingSinger at 10:09 PM

where is my space plane. i want to be able to go from LA to Capetown in 4 hours.