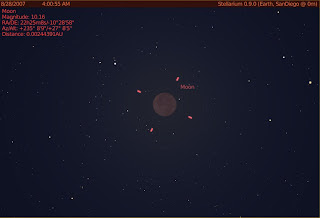 Although I haven't written about it, I've been reading and thinking about tomorrow morning's total lunar eclipse (but thanks for the reminder, Eric). The good news is that since I'm on the west coast this week, the eclipse will be visible for its full duration under dark skies. The bad news is that totality will occur between 2:52 am and 4:22 am PDT, and hey, I have to work tomorrow! But if skies are clear, it should be pretty spectacular, so I suppose I'll put myself temporarily back onto east coast time, go to bed early, and set my alarm for around 3:20 to have a look (the Stellarium screen shot is from 4:00 am PDT).

Stellarium also tells me that Mars will also be pretty high in the east at this time, near Aldebaran and above Betelgeuse. With a magnitude of +0.4 (according to Stellarium), Mars should be bright enough to see even above San Diego. Last night from the harbor, I could see Arcturus and Vega (both +0.3 magnitude) pretty clearly even before 9 pm, and even with everything in the vicinity of the harbor illuminated. Of course when Mars reaches opposition on December 24, it will be a lot closer and a lot brighter (-1.64 magnitude), but this is still worth looking for. And of course it won't ever be as bright as the full Moon, as the resilient Moon/Mars hoax emails (dating back to the very close opposition of 2003) are again claiming.
Posted by FlyingSinger at 8:48 PM