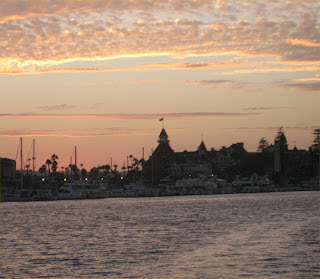 My fourteenth floor hotel room in San Diego looks out over the bright blue harbor and across to the US Navy base on North Island, where the aircraft carrier USS Ronald Reagan (CVN 76) lies at anchor. I can also see the San Diego airport and the tall buildings of downtown San Diego (it's a corner room with a balcony - pretty sweet view). There's a passenger train down there too, I just heard its whistle and watched it roll in. They've got all modes of transportation converging here!

Last night my company sponsored a sunset sailing cruise around the harbor for a few customers, and we got a closer look at the Reagan and at the USS Midway (CV 41), a historic WWII era carrier that is now a museum. We also got to watch the sun set over the historic Hotel Del Coronado, and saw a dramatic nearly-full Moon rise above the scattered clouds. I'd like to tour the Midway but I'm not sure I'll have time this week with booth duty and papers to attend at the conference.

Update: Somehow I missed this - there are now two more aircraft carriers docked across the bay that were not there last night on our cruise! One is the USS John C. Stennis (CVN 74), and I can't see the number on the other one. I could swear it was only the Reagan there earlier this morning when I looked. It's pretty strange when the equivalent of two good sized towns can show up outside your window while your not looking. CORRECTION: It's only the Stennis! In the morning light it looked like two CV's parked side by side, but I should have realized that wasn't likely!
Posted by FlyingSinger at 1:20 PM

Just a reminder, in case you haven't heard or have gotten distracted. That nearly full moon will be full tonight and in total lunar eclipse. Let's see now... with west coast times... the show should get started around 1:51am PDT, and totality should should begin about 2:52am PDT. Happy viewing.