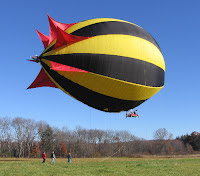 I'm flying to Orlando Saturday (not in this blimp!) for the NASA STS-118 educational conference, and hoping to also view the shuttle launch, which is part of the agenda for the conference, but of course beyond the control of conference organizers. Visiting KSC for some activities and a reception will be cool in itself, and if the launch happens on Tuesday (or Wednesday or Thursday), I'll be there. This CNN report from yesterday says that the cabin pressure-relief valve problem would be fixed by last night, but I haven't heard yet if it was successful. There are also timing issues related to the Phoenix launch now planned for Saturday - they need two days between launches, and the Mars transfer orbit window is only three weeks. The STS-118 launch could be delayed with less than the 26 month impact of missing the Mars window.

Meanwhile, closer to home, I heard a cool story on NPR about a guy in South Amherst, MA who has invented a new kind of hot-air blimp. It's got seats from a Camry and is designed to be maneuverable at low speeds. I'd love to fly in it someday, but it's experimental right now and the prospects for commercial operations are unknown.
Posted by FlyingSinger at 10:28 AM