Tiling By Your Toes 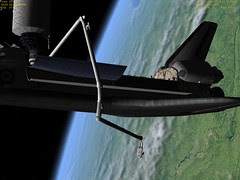 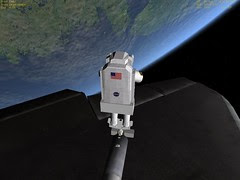 I missed the live broadcast of educator-astronaut Barbara Morgan's 20 minute "lesson from space," but watched a brief excerpt via this MSNBC article. From what I saw it was a pretty typical astronaut Q&A on "what's it like in space?" for three other astronauts in addition to Morgan, but I guess the fact that it finally happened is more important than what sort of lesson it was. I'm sure the kids in Idaho got a kick out of it.

Meanwhile in the virtual shuttle world of Orbiter, David413 released an updated set of STS-118 scenarios including one that simulates the configuration that could be used to place an astronaut under Endeavour's belly to allow access to the damaged tiles. The screen shots show how the spot can be reached with careful maneuvering of the SRMS (robot arm) with its 50 foot OBSS (Orbiter Boom Sensor System). The EVA astronaut looks to be hanging from his toes, but of course there's no practical up or down to worry about - though there are a lot of shuttle parts they will be careful to avoid hitting with the OBSS or any of the tools they will carry for the repair if they actually go this route.

UPDATE 8/20/07: These are perhaps the only images you will see of this tile repair EVA, since NASA decided several days ago that the repair was not needed for a safe reentry. Endeavour is now due to reenter and land on Tuesday, August 21.
Posted by FlyingSinger at 3:07 AM