Endeavour has undocked from the ISS a day early in preparation for an early landing on Tuesday, as NASA takes precautions for the possibility of Hurricane Dean disrupting operations in Houston later this week. This means that tonight is probably my best chance to see the separated Endeavour and the ISS passing over New England. 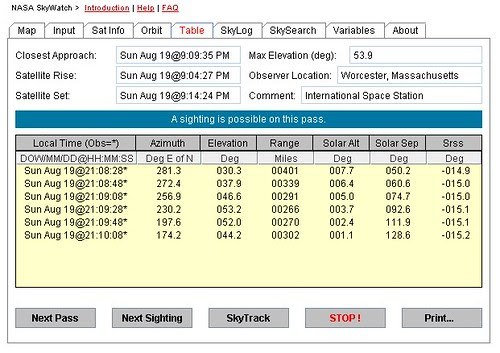 I used NASA's Skywatch utility to find the next sighting possibilities for the ISS and shuttle, which will be orbiting pretty close together over the day or so. It turns out that there's a really good opportunity for New England tonight between 9:08 and 9:10 pm EDT, when the two spacecraft will reach an elevation of around 53 degrees in the southwestern sky at 9:09 pm, assuming the clouds and sun cooperate. Sunset is 7:42 pm, but "astronomical twilight" isn't until 9:27 pm. I think it should be dark enough with enough illumination up at 354 km to make the two spacecraft visible if the sky is clear in that direction. Too bad the forecast is mostly cloudy. 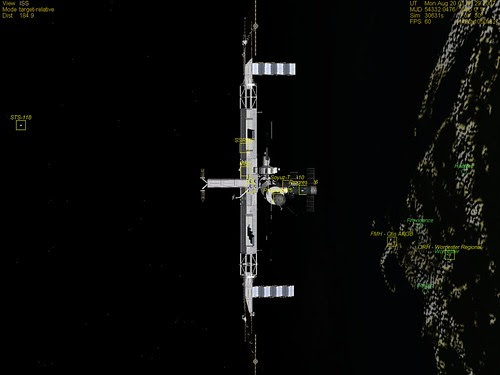 I used David413's latest STS-118 real-time scenario for Orbiter to try to simulate tonight's pass, and it came out pretty well. I first did a little customization of the Earth_alt.cfg file to add a base at Worcester Regional Airport (KORH), so I could see a label there from orbit and possibly to see the labeled spacecraft in the sky from a camera there, simulating what I might see tonight (I could have just used nearby Otis ANG which is defined as a base for landing, at least in the shuttle fleet's alternate Earth definition). This part didn't work out - Orbiter probably thinks they are too far to see from here, which is true unless the illumination angles work out to get visible reflections. But the orbital views of the spacecraft and ground show the situation pretty well, including a very close pass at 9:09 pm EDT (0109 UT as used in Orbiter). More pix on Flickr.

Now I wonder if I could land the shuttle in Worcester (in Orbiter, of course). Hmmm...

UPDATE 9:15 pm: We saw them! We had a great field of view centered on Arcturus in the west, but there were a lot of clouds. Fortunately 3 or 4 big holes opened up in the clouds and we saw both the shuttle and ISS for a couple of seconds in each hole, both very bright. Cool!
Posted by FlyingSinger at 2:33 PM