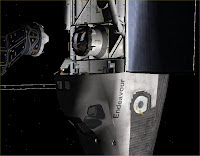 I watched the ISS docking video last night - nice and smooth. The pictures show a video screen capture of the final couple of meters from NASA TV (via YouTube, lower) compared to a similar view simulated in Orbiter (upper). But this isn't the deja vu I'm referring to in the title of this post.

There was also the news last night that the inspection of the shuttle's underside thermal tiles had revealed a "three inch gash" that engineers believe may have been caused by a chunk of ice coming off the external tank about a minute after launch. Bad news, but of course the good news is that they now check carefully for this type of damage, they carry materials for several repair options that can be performed with a space walk if necessary, and they have a relatively "safe refuge" at the ISS in case the diagnosis and repair (if necessary) require extra time in orbit.

I happened to be reading chapter 34 of Mike Mullane's Riding Rockets this morning, where he is describing his second shuttle flight in December 1988, STS-27, a classified DoD mission on Atlantis. This was the second mission to fly after the loss of Challenger in 1986. During launch, something was observed to break off the nose of the right-side SRB and strike the orbiter. Mission control (MCC) told the crew to use the robot arm to inspect the portion of the orbiter that it could reach (Mullane was the RMS operator on this mission). It revealed that there was indeed damage to the thermal protection system (TPS) tiles on the lower right side of the vehicle, with one tile missing completely. The video system in use at the time was not of the quality used today, and it was difficult to assess the damage, which the crew thought to be quite severe. MCC engineers reviewed the video and pronounced it to be OK.

Of course there was really nothing that could be done regardless of the extent of the damage - there was no ISS for safe refuge, and no materials or procedures for tile repair. Atlantis reentered and landed safely at Edwards AFB, but the problem was indeed extensive, with 298 damage sites greater than 1 inch in area, and 707 damaged tiles on the lower part of the vehicle, including long narrow streaks with deep gouges. It was the greatest TPS damage observed on any flight to that date, and it was in a relatively "lucky" place (e.g., the missing tile was near an L-band antenna site where the aluminum skin was thicker than normal).

In hindsight, you would think that damage this severe would have led to contingency plans for better in-flight inspection and possible EVA repairs, but this didn't happen until after the loss of Columbia in 2003. STS-27 was flying with SRB's whose nose cones had been slightly redesigned, and I guess that problem was fixed. There were still always pieces of ET insulation and ice that were hitting the orbiter after launch since the earliest days of shuttle program. This was something that was inherent in "side-mounting" the orbiter on the ET with its externally applied foam insulation, which in turn was a result of cost-driven design compromises.

The changes since Columbia have certainly helped, and we have seen in-flight repairs on several missions. I'm sure that NASA will be able to determine what is needed and that the crew will be able to make any needed repairs. But there's still that sense of deja vu and a history of a lot of close calls in addition to the tragic losses of Challenger and Columbia. And being an astronaut still requires a lot of courage.
Posted by FlyingSinger at 10:27 AM