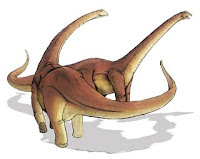 At the Ecotarium science museum today, I overheard a discussion between a father and his young son (maybe 4 years old). They had just seen the planetarium show "Cosmic Collisions."

Dad: So now we know how the dinosaurs died.
Kid: Yeah, that was pretty scary!
Dad: Yes, but lucky too - if the dinosaurs hadn't been wiped out, humans might not be here.
Kid: But what if a big asteroid is heading for Earth now?
Dad: We don't need to worry about that!
Kid: But what if one does hit the Earth now?
Dad: Well, we have scientists who are working on how to keep that from happening.
Kid: Then how come they didn't stop the one that killed the dinosaurs?

I didn't hear the dad's response, but it's pretty obvious that the dinosaur scientists were asleep at the wheel on that one. Or maybe the dinosaur politicians just didn't see the need for a vigorous space program.

The Orbiter table was pretty busy, benefiting from being right across from the ever-popular "try on a real space suit" station. So I got a lot of questions about crashing into Jupiter and the like, but also a lot of real curiosity about space stuff and a surprisingly high recognition rate on the Apollo program from younger kids (they at least knew it was a moon program, and that somebody went).
Posted by FlyingSinger at 5:57 PM

If the dinosaur politicians are anything like our own, they were probably still debating the funding for the asteroid intercept mission.