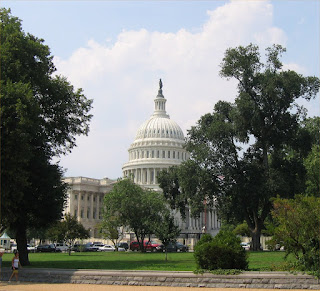 There's a news item today about how little Americans know about their government institutions, US history, and economics at a very basic level. It's pretty bad - fewer than half of all Americans can name all three branches of the federal government, for example. But this was not the main point of today's news since ISI has been giving this quiz and reporting the results for several years (summary here). The news was that a measurable subset of the latest test takers reported that they either are or have been elected officials - and these people did even worse (average 44%) than the general public (49%). The whole Sarah Palin thing starts to make a little more sense now. You don't need to know much about government - just do it! And be sure not to blink.

P.S. You can take the civics quiz yourself here, it's only 33 multiple choice questions. Pretty basic stuff. I got 100% on it. Every American should!
Posted by FlyingSinger at 11:00 PM

I got 4 wrong - but then I'm Australian. Some of the economic questions are question-begging, too.

88% is twice as good as the elected official average (for a random sample of Americans) and even better than the 77% average for people who took the quiz in November (self selected people who have enough interest to seek out and take the test). Quite impressive!

When I've traveled in Europe and Australia, I've always been impressed with the level of knowledge and interest that people have in what's happening in the USA, and in general beyond their own borders (this may be true in Asia too, but I tend to discuss this more with Europeans and Australians, in part because of English skills). Many Americans just seem to take our country for granted and don't care much about other countries unless there's a crisis that directly affects us, or some big sporting event like the Olympics.

More people got involved with the presidential campaign this time, and I'm sure that the Obama administration will be more outward-looking and "team oriented" regarding other nations. So maybe our self-absorption will ease up a bit in the next few years, and maybe more people will decide to be more active as citizens, believing that we can actually make a difference. On the other hand, many more people did NOT get involved with the election. So who knows?