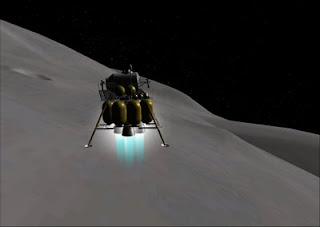 One of the things that's nice about spaceflight in the simulated solar system of Orbiter is that you always know exactly where you are and how fast you are moving in 3D. It's easy since this is the information that the program is numerically predicting with every tick of the simulator clock. It can simply use coordinate transforms to express your position and speed relative to the body you are orbiting or trying to land on. Piece of cake.

In real life, knowing your position and velocity is not quite so easy. On or near the Earth, you've got GPS, and ground based Doppler radars can measure position and speed with quite good accuracy even as far away as the moon. Going the other way, ground based receivers can determine a lot of information from the radio signals transmitted by even very distant spacecraft. JPL obviously has this down, since they routinely maneuver the Saturn-orbiting Cassini spacecraft to pass within a few kilometers of Titan and the other moons of Saturn.

But what about landing on the moon or on Mars? The Apollo lunar module used radar to provide ground reference data down to a few tens of meters altitude when the commander would take over to manually avoid boulders and craters and land safely. Future lunar landers will need to land accurately even without a pilot on board (there will be unmanned cargo flights). So they will need very precise position and velocity information. 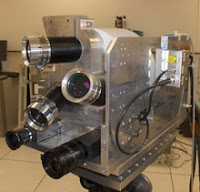 Fortunately we have optics. Laser radar (LIDAR) can use pulsed lasers to measure distances very accurately, but for a new lunar landing laser system, NASA will use three continuous-beam lasers and is applying the Doppler technique to get continuous and more accurate velocity information as well. In an optical context, the Doppler shift shows up as a very small "red shift" or "blue shift" in the wavelength of the light that bounces off the surface and is collected by the receiver lenses. And this is only part of the story - you will still need other systems to image and evaluate rough terrain and obstacles. The Technology Review article doesn't go into too many details on the method, but it gives a good general idea of how a laser system like this will guide future astronauts to precise and safe landings on the moon and eventually on Mars.
Posted by FlyingSinger at 9:41 PM