Our Eyes on Mars 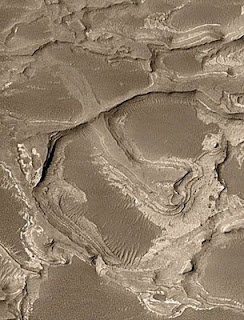 The new Air & Space Magazine arrived with a cool article about Michael Malin and Mars. Malin is responsible for the cameras that have given us so many amazing images of Mars in the last ten years or so. It would have been more like 15 years if the Mars Observer had achieved orbit (contact was lost in August 1993). Malin's backup MOC (Mars Observer Camera) was carried a few years later on Mars Global Surveyor which reached Mars orbit in September 1997. This simple but powerful camera was able to image surface details at much higher resolution than the Viking Orbiters had provided, revealing sedimentary layers as well as drainage gullies and other clear evidence of flowing water in Mars' geological history. It's hard to believe that they had to fight to even get this sort of camera on these Mars missions, but Malin and his team persevered and the images returned from these and other Malin Space Science Systems (MSSS) cameras (on Mars Reconnaissance Orbiter and Phoenix) have helped to reveal Mars as a much more diverse and dynamic planet than was once believed.

The article is by Andrew Chaikin and is an excerpt from his recent book, A Passion for Mars: Intrepid Explorers of the Red Planet. Air & Space also has a web-only photo essay feature showing some Mars images selected by Malin and his team as favorites. The MOC image above shows the "fossil" delta in Eberswalde Crater, clear evidence of past flowing water (it reminds me of some aerial pictures I took over southern Utah last year). The MSSS web site has a huge, well-indexed gallery of Mars images.
Posted by FlyingSinger at 9:58 PM