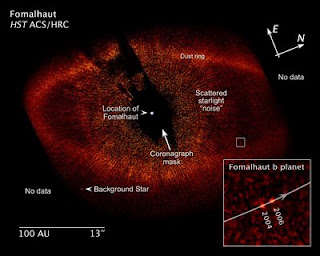 If you pay attention to space and astronomy news, you've certainly heard about this already - it was even a top five popular news items on Yahoo earlier today. But I have to chime in to say that direct imagery of planets orbiting stars other than the sun is simply an amazing accomplishment, one that I didn't expect we would see for a few more years. But thanks to the ever amazing Hubble Space Telescope and the wonders of adaptive optics coupled with large ground based telescopes, we've now seen exoplanets "with our own eyes"- four planets orbiting two different stars!

"With our own eyes" is not literally true, of course, but compared to inferences made from photometry curves (when a planet passes in front of the star, the star's light dims) or gravitational "wobble" (tracking small deviations in the star's position caused by orbiting planets), this is truly the realm of "seeing is believing." It opens the door to spectral analysis of the light reflected from these faraway planets, and although we can only see quite large planets now (several times the mass of Jupiter), it may not be too long before we can detect a "pale blue dot" like the one seen by the Voyager spacecraft when they looked back toward home en route to the outer planets of our solar system.

I grabbed today's Astronomy Picture of the Day for the nice labeling of the planet Fomalhaut b and its accompanying dust ring. Talk about a needle in a haystack! This is a planet that is 25 light-years from Earth, pretty much a next door neighbor in the the cosmic scheme of things.
Posted by FlyingSinger at 7:09 PM