My Space Message to Change.gov 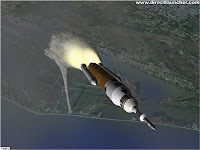 I decided to submit a space-related message to the Obama Transition Team through their change.gov web site. I'm sure they have received thousands of messages on every possible agenda point, but I figured it couldn't hurt, and I could always turn it into a blog post:

I know there are many things to decide and do in the early days of the Obama Administration. Space may not be the top priority, though I have read that GSA considers the decision on extending shuttle flights beyond 2010 as a top-13 early decision. I'm not an aerospace professional - I'm an optical engineer who does space-related volunteer educational outreach as a NASA/JPL Solar System Ambassador. I believe that space exploration can help to inspire our next generation of engineers and scientists, and I believe that space can also help us develop the technologies and jobs that will help us with energy and environmental problems in the years to come.

I have three suggestions that are probably already being considered, but I'll mention them anyway:

1. Ares vs. Direct 2.0 or other launch vehicle options - I hope that an independent study will be done to look at the viability of NASA's planned Ares I/V launch vehicle program vs. other possible options. I know that NASA says the Ares rockets will work well and that proposed alternatives have fatal flaws. But it's definitely worth a careful second look. I'm sure the Direct team (and others) are pushing this message.

2. Increase emphasis and funding for private space ventures - The COTS program is in place and SpaceX is developing launch, cargo, and crew vehicles for ISS support. But funding for this should be increased and expanded to support other companies as well. Private space may be able to close the shuttle/Orion gap for US-based crew access to the ISS sooner than other options.

3. Increase NASA's role in education and inspiration - NASA already does a lot of educational outreach but more could be done, including expansion of community-oriented programs like the JPL Solar System Ambassador program. I am one of some 500 volunteers throughout the US, and this program already reaches tens of thousands of people every year with encouragement (and minimal funding) from NASA. Space exploration past, present, and future has a lot of great stories to tell, and NASA should do more to bring these stories to life for members of our communities, especially but not limited to kids.
Posted by FlyingSinger at 3:23 PM