When We Left Earth 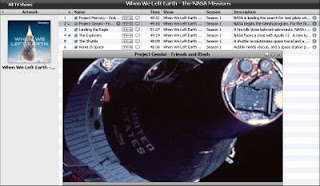 On the long plane ride home from Salzburg yesterday, I had time to watch a few videos I had loaded on my iPod, including two episodes of the Discovery Channel documentary miniseries "When We Left Earth - The NASA Missions." I missed this when it was broadcast on the Discovery Channel earlier this year, so I was pleased to find the six episodes for sale on iTunes for only $1.99 per episode (about 50 minutes each).

The two episodes I watched were on Project Gemini and the early Apollo missions (up to Apollo 11's first moon landing). The series includes some previously unreleased NASA footage, and all the footage was digitally restored and enhanced - it looks really great. The Gemini episode was focused on the rapid pace and on the many key capabilities that had to be demonstrated in preparation for the Apollo moon missions. These included EVA (space walks), rendezvous and docking, and long duration flight (up to two weeks on Gemini 7, in a two-man capsule with a volume similar to the front seat of a very small car - Frank Borman and Jim Lovell said the cabin environment was especially nasty on the last three days of the mission). Gemini 6 was launched while 7 was still in orbit in order to rendezvous with it, and the close up film of this meeting in space is especially dramatic. I had forgotten that two Gemini missions were launched on my birthday, June 3 (Gemini IV in 1965, Gemini IX in 1966).

The Apollo 11 episode is good too, although cramming Apollo 1 (the fire), 7, 8, 9, 10, and 11 into one hour doesn't really do justice to the accomplishments of the pre-landing missions. It is really cool that Neil Armstrong agreed to appear in the interview segments (I wish he had also agreed to appear in last year's In The Shadow of the Moon).
Posted by FlyingSinger at 6:30 PM