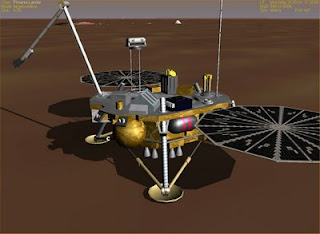 The Mars Phoenix mission is over. It was planned for three months and lasted for five, but as a fixed robotic lander in the north polar region of Mars, there came a point where its solar panels simply could not produce enough power from the low sun to keep it going, even with special power management techniques like selectively shutting down parts of the spacecraft to save power for other systems. So this really isn't a surprise and Phoenix accomplished a lot of good science in its time, doing experiments 149 out of 152 days. The picture above is from Orbiter (the excellent Phoenix add-on by Brian Jones).

If all goes well (including funding), NASA will launch another Mars visitor in fall of 2009, the highly mobile Mars Science Laboratory, a Mars-ready "SUV" with the heart (and brains and instruments) of a planetary scientist. MSL won't be dependent on the sun to keep its wheels rolling, its instruments warm and measuring, and its radios transmitting.

P.S. The Astronomy Picture of the Day for November 12 has a brief summary of the Phoenix mission including some good links.
Posted by FlyingSinger at 9:24 PM