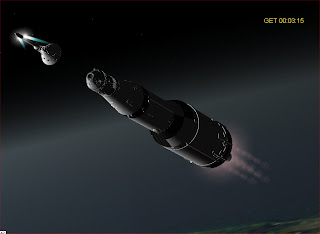 It was forty years ago today... Sergeant Pepper taught the band to play...

Oops, wrong anniversary. But forty years ago today, the first manned moon mission was launched. Apollo 8 carried Frank Borman, Jim Lovell, and William Anders on their historic moon-orbiting flight. It was also the first manned launch of the mighty Saturn V booster. Astroprof has done a great job summing up the mission and the circumstances that led up to it, so I'll refer you to his post for the details.

In honor of this anniversary, I fired up Orbiter and AMSO to do a virtual recreation of the Apollo 8 launch, and my virtual astronauts are now in Earth orbit awaiting my calculations for the TLI (trans-lunar injection) burn. I better make sure they don't miss their window.

My Orbiter screen shot shows something that was never actually photographed, the separation of the launch escape system from the command module a few seconds after first stage separation (about 3 minutes after launch, GET = ground elapsed time).

[Update: I decided to add another "never actually photographed" view from Orbiter, simulating the famous Apollo 8 Christmas Eve Earth rise photo. There are more Apollo screen shots from Orbiter on my Flickr site.]
Posted by FlyingSinger at 10:39 PM

Note this dedication article to Apollo 8 on its 40th anniversary here: