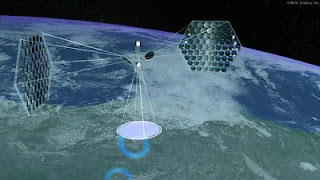 One of the great things about the Obama transition is that the public is invited to participate, to have "a seat at the table," as they put it on the change.gov web site. They have invited proposals from outside groups (37 pages of links so far) with the provision that all documents submitted will become public (they are PDF files on the web site). You can read them and then join in the discussion through forums associated with these proposals. Open government!

I just learned about a proposal on space solar power (SSP) that is under discussion there. I read the brief proposal and browsed many of the comments. Although there are some off-the-wall comments as in any public forum, the discussion is impressively multi-level and well informed. I rated a number of comments (thumbs up or down) and added a general comment to one of the most informative posts. If you care about this issue, you should go read, vote, and comment.

Of course there is no guarantee that SSP will be pursued by the Obama administration. It's one of hundreds of proposals. But the fact that these discussions are happening is in itself such a hopeful sign. This combined with the impressive cabinet and other appointments that have been announced shows that change is indeed coming. We will soon have leaders in Washington who don't have their heads in the sand! Or wherever the current administration's heads have been.

P.S. It's not very clear on change.gov, but the forums are run by IntenseDebate.com, and to register for the forums, you need to set up a free account there, even if you have registered at change.gov for other things (as I had done).
Posted by FlyingSinger at 5:33 PM