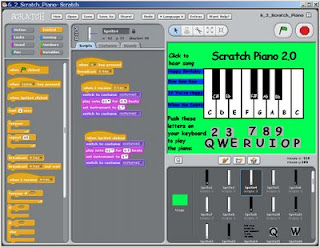 I've finally figured out my place in the world: Lifelong Kindergarten! That's the name of a research group at MIT's Media Lab, with the motto "sowing the seeds for a more creative society" (for more on what LLK means by this, read this article by LLK's director Mitchel Resnick). On their mission page they say

Our ultimate goal is a world full of playfully creative people who are constantly inventing new opportunities for themselves and their communities.

"Playfully creative" is probably the best way to describe the implicit goal that seems to connect all the crazy threads of my life - songwriting, guitar, performing, flying, foreign languages, diverse reading, writing, programming, traveling, exploring various technologies, teaching, etc. I like nothing better than to learn something new that is complex, full of potential, and somehow connected to my other interests.

Case in point: Etoys and now also Scratch, a similar drag-and-drop visual programming language developed and released (for free) by the MIT Media Lab. I've downloaded, installed, and played a bit with it, using its very intuitive "snap together" programming blocks. I haven't been able to explore any of the many user projects uploaded to the Scratch gallery because the Scratch server won't open for me - perhaps it's just overloaded. But I did find a great site called learnscratch.org which has at least 30 example projects with detailed tutorials, and I tried a bunch of them. The picture here is a simple piano keyboard project (each key is a separate "sprite" with its own scripts).

I'm still learning Etoys and have barely started to explore Scratch. It's clear that Scratch is more immediately intuitive and in some respects more polished than Etoys. It also seems to have a more extensive "infrastructure" including a social networking aspect through the Scratch web site (which I would love to see - I was only able to get to the download page very late last night and nothing will open on the site today). It's probably easier to get started teaching younger children with Scratch than with Etoys. But I have a feeling that Etoys is more powerful and extensible for the middle school space/physics projects that I hope to develop starting in the next few weeks.

Both of these environments are amazingly empowering and bring new meaning to the word "interactive" (both also operate equally well in many different world languages). One of my favorite SF books is Orbital Resonance by John Barnes (I've written before about his Meme Wars series). It takes place on a "lifeboat" space colony "resonating" between Earth and Mars in the near future (after a series of Earth-threatening catastrophes), and the narrator is a very bright 13 year old girl. The colony's education system is radically different from our current system and is geared toward creating smart, flexible, capable citizens and leaders to help the human race survive its precarious situation. Many of the school projects that are assigned involve creating complex computer simulations of scientific, technical, and social systems, a necessary part of understanding problems and making good decisions in their very challenging circumstances. I wondered how kids in such a world could manage to do that so quickly and efficiently. Now that I've seen Etoys and Scratch, I have a lot better idea of how something like that might really be possible.

P.S. MY BAD on problems with the Scratch web site. It was a firewall security problem that I sometimes have with certain web sites. I just visited the Scratch site and it's got a lot of really great features and a very active user community.
Posted by FlyingSinger at 3:55 PM

Thanks for the positive comments about Scratch. I'm sorry you couldn't access our website. I hope you get to try it again. I am surprised it wasn't working when you visited since we have active monitoring and self-healing processes in the event of a traffic spike. Scratch on!

MY BAD on problems with the Scratch web site! It was a firewall security problem that I sometimes have with certain web sites. I just visited the Scratch site and it's got a lot of really great features and a very active user community.