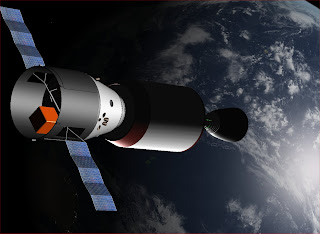 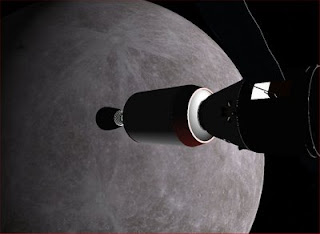 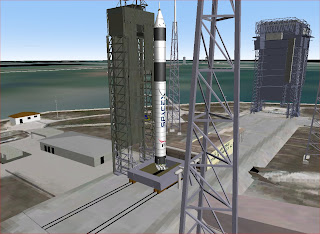 The other day I wrote about SpaceX and the ISS resupply contract they recently received from NASA. I showed an Orbiter screen shot of the Falcon 9 launch vehicle, and commented that I wasn't sure of the status of SpaceX add-on developments for Orbiter.

Checking into this over at Orbit Hangar, I first learned that the Orbit Hangar web site itself has just been given a major overhaul, with a new look and new search and browsing features. Cool! And there have been some SpaceX add-on developments since I last looked in maybe March 2008. There is a "beta" of Glider's "SpaceX Launchers and Dragon 0.58" from April or May 2008. Based on limited testing with the Falcon 9 and Dragon on supplied scenarios, this looks pretty good and is mostly working, though I had some difficulty with rotational control using thrusters. The Dragon capsule and service module are separate spacecraft, so you need to use [F3] to choose the right one for some actions (e.g., K will open the solar panels if the service module is selected).

There is also "Falcon 9 - Dragon Beta 3" by MajorTom, dated April 13, 2008. I didn't test this one. At one point, Glider and MajorTom were working on merging their SpaceX projects and I think this probably happened, but I'm not sure. Glider's version seems more complete but there isn't much documentation.

The latest development is based on Glider's add-on, "SpaceX Lunar Tourism" by Henry the Orbiter. This simulates a hypothetical free-return mission (once around the Moon and back to Earth). It involves two launches, a Falcon 9 Heavy (27 first stage engines!) carrying a "TLI Kicker Stage" and a regular Falcon 9 carrying the Dragon with the pilot and six tourists. The Dragon docks with the TLI stage in low Earth orbit, and the TLI Kicker Stage is fired to send them around the Moon. I only tried a few scenarios including post-TLI, around the Moon, and returning to a hard impact in southern Africa (I skipped the mid-course corrections and re-entry preps, oops). It was cool to watch the Moon get bigger and bigger, to not hit it, and to see the Earth emerge on the other side! This add-on includes some documentation on SpaceX, Glider's add-on, and the Moon mission.
Posted by FlyingSinger at 3:29 PM

Thanks for the review of SpaceX Lunar Tourism :)I just released SpaceX's BFR launcher last night on Orbiter Hanger.

I had little to go on, only some vague remarks from Elon about possibly building a 100+ MT launcher in the future. I tried to stick with SpaceX's moto of up-scaling and moduler design. Nine first stage Merlin-2 engines based on specs from TRW's TR-107 engine. Second stage is one Merlin-2 with vacuum extension. It's dimensions and capacity is roughly the same as NASA's new Ares-V. Lots of estimation while "trying" to stay true to SpaceX's goals. Hi-Res version is hopefully coming out this weekend. Hope you enjoy. Thanks.

Time to get started of next phase of project.