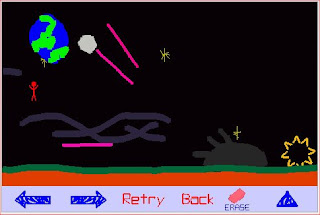 There are zillions of "apps" for the iPhone and iPod Touch, most of them games, and many of them free or costing only 99 cents (I read an article somewhere saying that some people are making tens of thousands of dollars a month selling low-cost apps on iTunes). Aside from music and video (movies and YouTube), my most frequently used apps are the New York Times reader, eReader (for reading ebooks), WeatherBug, and StarMap. I have quite a few musical instrument apps too, but it seems the main use of those is to show people how cool the iPod Touch is. Otherwise, a real guitar or keyboard works much better.

I've also downloaded many games, though I usually end up deleting them after trying them a few times. I'm really not a big game person. But Trace is a tiny exception. It's great for wasting little slices of time here and there. You've got this little stick figure character you can move with arrow and jump buttons. You have to walk him across the screen to a little yellow sun target, avoiding various fixed and moving obstacles that will send you back to the start. You do this by drawing lines with your finger - your character uses these lines as platforms or bridges over and around the obstacles. Sound easy? Sometimes it is, but often you have to solve a puzzle or use careful timing to get through. The graphics are child like and often funny. It's really a lot of fun. And it's free!

The screen above is from "Space," one of six "worlds" in the game. Each world has its own music (which you can turn off) and about 20 levels. This video shows examples from most of the worlds (this shows an earlier version of the game where the character was just a little red line).
Posted by FlyingSinger at 5:21 PM