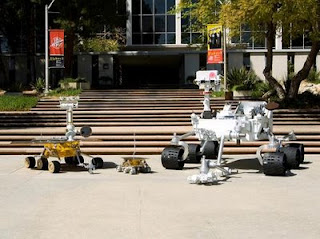 JPL has announced that the Mars Science Laboratory (MSL) will launch in 2011 rather than in fall 2009 as originally planned. There's just too much development and testing still left to do on the giant new rover to safely make the 2009 Mars launch window. Better safe than sorry, as long as they can manage to keep the program's funding going until 2011. MSL is a big, expensive project and while the 2004 Mars rovers have been a great hit with the public, NASA funding is bound to be tight in the next few years, and there are other NASA unmanned science programs competing for those limited funds.

On the bright side: more time for kids to name the new rover with the help of Pixar's fictional robot WALL-E (I just bought and watched the WALL-E DVD, and I liked it even better seeing it the second time, even if the space physics is just a wee bit unrealistic). This also gives more time for some enterprising Orbiter add-on developer to create a MSL add-on! In the meantime, Scott Conklin's excellent MER-2003 add-on will let you play around with Spirit and Opportunity if you'd like to do some virtual launching, landing, and roving.

The JPL picture above shows three generations of Mars rovers including tiny Sojourner and SUV-sized MSL.
Posted by FlyingSinger at 3:17 PM