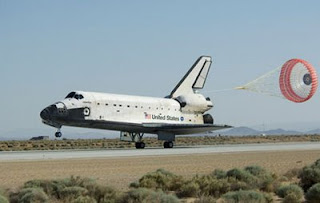 Bad weather in Florida required Atlantis to land at Edwards AFB, California, and they made a beautiful landing there this morning at 8:39 a.m. PDT. 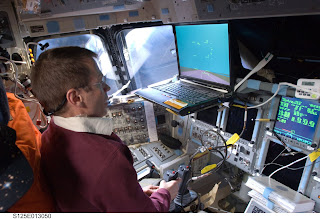 I love this other picture that I found on the STS-125 gallery site, showing shuttle pilot Gregory Johnson practicing for the landing with a simulator on the flight deck of Atlantis. Here's what it says there:

S125-E-013050 (21 May 2009) --- Occupying the commander's station, astronaut Gregory C. Johnson, STS-125 pilot, uses the Portable In-Flight Landing Operations Trainer (PILOT) on the flight deck of the Earth-orbiting Space Shuttle Atlantis. PILOT consists of a laptop computer and a joystick system, which helps to maintain a high level of proficiency for the end-of-mission approach and landing tasks required to bring the shuttle safely back to Earth.

Just like Orbiter on my laptop (almost)! Except Orbiter has better graphics.
Posted by FlyingSinger at 9:14 PM

Thank you for the tip

your blog is quite informational ..