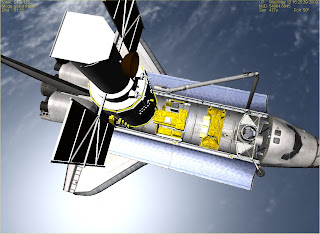 The STS-125 mission to the Hubble Space Telescope continues to go well. I followed parts of the final approach, line up, and grappling steps on NASA TV the afternoon. You could see how detailed planning and practice pays off in smoothness and precision. Atlantis was maneuvered to exactly the right orientation with respect to HST, with the telescope centered just 30 meters or so above the payload bay, and the long axes of the telescope and shuttle perpendicular. Then the commander used vertical thrusters to smoothly rise until the pre-positioned RMS arm was nearly lined up with the HST's grappling fixture, where relative motion between the two spacecraft was frozen (something like the simulated Orbiter view above). 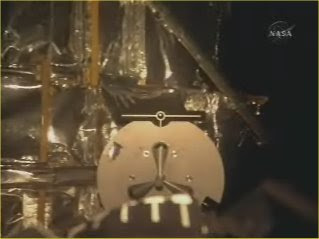 Mission specialist Megan McArthur then made short work of grabbing the fixture (nearly final end-effector camera view from NASA TV above), moving the RMS's end effector essentially straight forward by what appeared to be a meter or so. I had to go to a meeting and missed the berthing step, but when I came back, they were just withdrawing the RMS. Now they are all set to start working on the telescope (view of HST solar panel below). 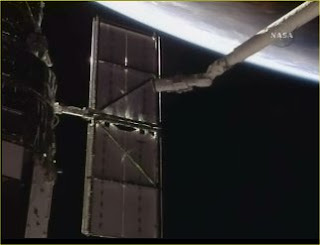 Posted by FlyingSinger at 2:17 PM