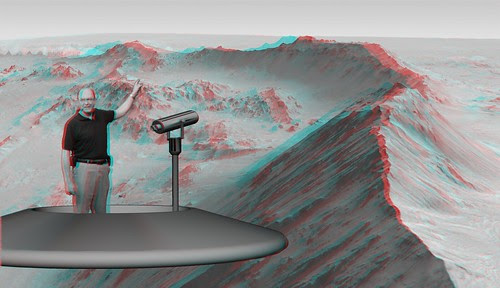 I'm not sure when I will have time to write about JPL's Open House in more detail - probably in the next day or so. It was really a wonderful experience, especially the four hours I spent helping out in the Mars Program area, talking about Mars and the MER Rovers with many visitors and with some of the JPL Mars Program staff members. I have already posted some pictures at Flickr, and now I've added one more that I downloaded from a JPL site...

This red/cyan anaglyph image was taken at the JPL Open House yesterday. You stand in front of a green screen for a few seconds while they capture a stereo image of you pointing behind or something (you want some front-back depth). They then superimpose this image with an anaglyph of Mojave Crater on Mars, created from MRO imagery. They give you a web site and an image number so you can later view and/or download your image from the web.

You will need red/cyan "3D glasses" to properly view this image (click the image above to go to my Flickr page where you will be able to choose from several sizes to view - the original image is 1778 x 1024 pictures, too big for most monitor resolutions). The 3D effect is pretty striking (especially the crater rim). Mojave Crater is a 58.5-km-diameter impact crater in the Xanthe Terra region of Mars. The image was created from two Mars Reconnaissance Orbiter (MRO) High-Resolution Imaging Science Experiment (HiRISE) observations ofMojave Crater.

Oh yeah, they also added the flying saucer thing to hide my feet on the non-green-screen floor.
Posted by FlyingSinger at 7:49 PM