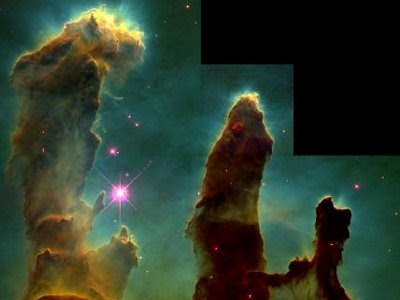 It's not gone yet, but with the final Hubble service mission (STS-125) set to launch on Monday, WFPC2 will soon be replaced by the new WFC3 instrument. WFPC2 was built by JPL as a backup for the original WF/PC (Wide Field and Planetary Camera) that was installed in HST when it launched in 1990. When the error in HST's primary mirror was discovered, WFPC2 was already in construction, and it was quickly realized that relatively minor optical adjustments could be built into it to correct for the primary mirror's aberration without using the auxiliary correction optics (COSTAR) that would be needed for Hubble's remaining on-board instruments.

WFPC2 was so modifed and completed by JPL and was installed by astronauts on the first service mission in 1993. It turned out to work very well indeed. WFPC2 served as Hubble's primary instrument for imaging in the visible spectrum from 1994 on (until ACS, the Advanced Camera for Surveys, was installed in 2002, and again since 2007 when ACS failed). WFPC2 incorporates some clever optical engineering, including the ability to optically align certain components by remote control while in orbit. This was especially critical, since the built-in aberration compensation for HST's primary mirror depended on very accurate alignment between the "output beam" of the main telescope and the "input optics" of WFPC2.

The results speak for themselves - many of the most iconic and beautiful Hubble images that we know and love were produced by WFPC2 (not to mention a lot of great science). JPL's web site has several articles and an image gallery looking back on WFPC2's discoveries.

One of those images is the famous "Pillars of Creation" in the Eagle Nebula. The picture above shows the characteristic stair-step shape of WFPC2's segmented field of view. 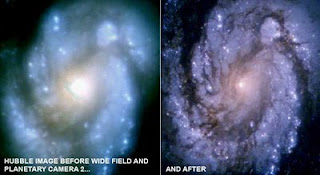 Posted by FlyingSinger at 5:49 PM

WFPC2 was so modifed and completed by JPL and was installed by astronauts on the first service mission in 1993.