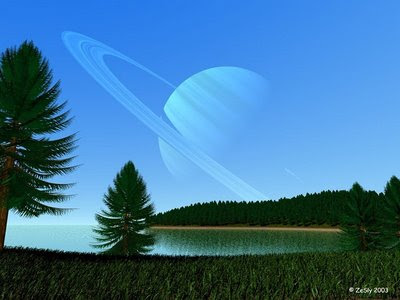 In 2007 I wrote a couple of times (here and here) about a science fiction novel called Coyote which involves the exploration and colonization of an Earth-like moon orbiting a Saturn-like planet in a solar system 46 light years from Earth. I connected this to the then-recent discovery of a gas-giant exoplanet orbiting in the habitable zone of its star, and I commented, "Of course no moons have been detected yet, but all the gas giants of our solar system have them, and it's reasonable to assume that extrasolar gas giants would as well."

That statement is still true, but according to an article I just read in the July 2009 Sky & Telescope, there is a real possibility of detecting such exomoons in the near future. The article is by David Kipping, an astronomer at University College London. I assume the S&T article is not online yet (haven't checked), but Kipping has a good overview article on his web site, as well as links to technical articles and other resources. The basic idea is that a moon orbiting an exoplanet detectable by the transit method (passing between us and its star) will cause some small "wobbling" or variation of the transit velocity, and that these changes could alter the predicted transit profiles. These would be small effects, but according to Kipping, for some cases, they could be detectable with quite modest telescopes equipped with good CCD detectors - such as those used by some amateurs these days!

The painting of a fictional exomoon orbiting the real exoplanet HD 28185 is courtesy Sylvain Girard.
Posted by FlyingSinger at 7:35 PM