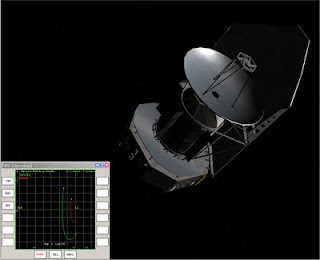 The Hubble Space Telescope is a cool spacecraft, and the STS-125 astronauts are busy working on making it better than ever. Despite difficulties with some bolts, yesterday's EVA team removed the workhorse WFPC2 and replaced it with the new WFC3 camera system. Today the second EVA team has replaced RSU's (Rate Sensor Units, part of the telescope's attitude sensing system) and is now working on replacing batteries.

Update: I wasn't following the EVA earlier in the day and I missed the trouble that Mike Good had with installing one of the new RSU's, requiring the installation of an older but refurbished unit that was carried as a backup. Those NASA folks think of everything, but the trouble put them significantly behind schedule and required extending the EVA duration to allow enough time to do the critical battery task. I bet those guys sleep well tonight! Even for well-trained astronauts in great physical shape, a 7.5+ hour space walk has got to be exhausting.

As cool as Hubble is, the Herschel spacecraft that was launched by ESA earlier this week is super-cool. Literally. This advanced telescope for far-infrared and millimeter-wave observations has a supply of liquid helium on board to keep its sensors cooled below 2 K (less than 2 degrees above absolute zero). As an optical engineer, I'm impressed that this Cassegrain telescope has a 3.5 meter primary mirror, the largest yet launched into space (Hubble's primary is 2.4 m in diameter). Using these long wavelengths, Herschel will be able to image very distant, cold, and dust-shrouded objects to investigate the early history of the universe.

Herschel was launched with a companion spacecraft called Planck, which is a microwave observatory designed to study tiny fluctuations in the cosmic microwave background radiation (CMB), allowing scientists to infer the structure of the early universe as early as 380,000 years after the Big Bang (that's only about 0.003% of the estimated age of the universe, 13.5 to 14 billion years). ESA has a lot of online information on both Herschel and Planck. 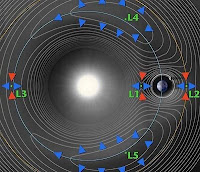 Both satellites will operate quite far from Earth, at the Sun/Earth L2 Lagrangian point. They will be established in separate Lissoujous orbits around the L2 point. If you would like to see what this looks like for yourself, you can do so in Orbiter, courtesy of Brian Jones and Papyref, whose latest add-on simulates the Herschel and Planck spacecraft and also provides a special tool for viewing their orbits around the L2 point (screen shot at top). The models and included materials for this add-on are quite detailed. There is one L2 scenario provided, plus two launch-related scenarios (these require additional add-ons for the Ariane 5 launch vehicle and the ESA Kourou launch site.