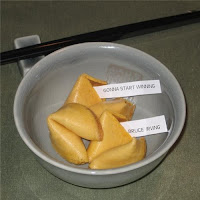 I released my first "single" from my upcoming album, a song called "Gonna Start Winning" (Amazon MP3). I recorded this song in 2003 (this new album project has been going on for a while). It's a sort of country/rock boogie tune with slide guitar work by Roger Lavallee and piano by Steve Mossberg. The picture refers to the first line of the song, "When a fortune-cookie fortune blew my way, I could tell today was gonna be OK." I notice I use the word "gonna" a lot, mainly in songs.

So how is this a "single" when I don't have a label (or even a CD for this song)? I found a service called TuneCore that allows you to get an MP3 single onto iTunes, Amazon, and various other download sites for a total cost of $9.99 per year. You can do an album for $19.98 a year (there are also per-track and per-seller one-time charges for albums, something like 99 cents per track and per seller, where a "seller" could be iTunes USA, iTunes Japan, Napster, Rhaposdy, Amazon MP3, etc.). Amazon was really quick - the song was apparently up on May 13 (I just noticed it there). It's also on Lala.com, Rhapsody, and Napster (where I somehow became "Bruce Irvine"), but it's still not up on iTunes.

I also did another session with Roger yesterday, starting a new recording of a 1980 song I wrote with Rob Simbeck, "Out of Nowhere." This didn't go nearly as well as Tuesday's session on "Message from Tomorrow," and the problem seemed to be that I couldn't play the song well enough on either guitar or piano to get the really jazzy feeling the song needs to have. So Roger is lining up a good keyboard player and we'll book a session to continue the song when he is available.

For the rest of the session, we worked on some loose ends for a couple of songs recorded in 2003 or 2004, one of which is now available on Garageband - "Everybody Everywhere."
Posted by FlyingSinger at 2:28 PM

You found us indeed, FlyingSinger! Welcome aboard.

If you need anything, just shout! Don't forget to take advantage of the nearly dozens of opportunities you get as a TuneCore artist.