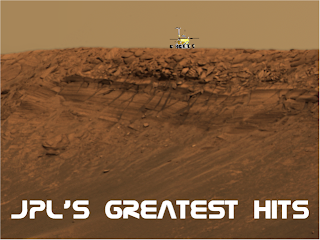 I've got another IYA podcast coming up on June 4. It's called "JPL's Greatest Hits" and I completed it over the weekend. It's more or less a DJ-style top-10 list of what I consider to be JPL's greatest space exploration missions from 1958 to today. It was tough to settle on just ten, but that's what a top-10 list is all about. Of course it's just my opinion in any case.

I won't reveal my top ten before the podcast "airs" (you can probably guess most of them, or choose your own top 10 from this list), but I will reveal some new music I created for it. I actually re-used a couple of suitably spacey instrumentals that I wrote for my April 14 IYA podcast, "Exploring Space with Your Computer," but in keeping with the theme of boldly going where no one has gone before (as JPL has done throughout the solar system), I wanted to add a suitably "heroic" theme. So over the weekend I wrote and recorded "Planetary Exploration Theme," and I posted the MP3 on my Garageband page.
Posted by FlyingSinger at 3:48 PM