Creative Concentration: What It Is? 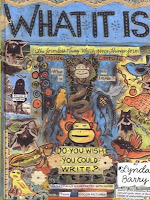 What do the following things have in common?

For me, these have all been forms of "adult play," what Lynda Barry calls creative concentration (I'm not doing all these things now, but I have invested significant time and energy in all of them over the last 35 years or so). I just discovered this idea of "creative concentration as adult play" in her amazing book, What It Is, a sort of graphical... something or other. Journal. Writing workshop. Comic book. Memoir. Self-help book. All of the above. More than the above.

I've always had a feeling that creativity is an important part of my life. I strive to put creativity into the work I do in my job, and I have had success and satisfaction with that. But it's the work that I don't have to do that seems to demand the most in the creativity department. It takes a lot of time and energy (and sometimes money) - so why do this stuff at all? Is there a shortage of songs that I need to make up? Does the world need this blog? Does it need another private pilot? Does it matter that I know how to dock a simulated space shuttle with a simulated space station? Probably not to anyone but me. But one of the points that Barry indirectly makes in What It Is is that creating something is an experience worth having - regardless of what it is that is created.

Of course it's hard to avoid the inner critics, with questions like "does this suck?" and "what's the point of this?" - but it's important to learn to ignore them at least during the creative process, and to recognize that when you re-read or review something you write or otherwise create, that "critic" is not the same part of your mind as the part that did the creating. The critic has a different agenda (like maybe preventing embarrassment). Barry suggests for writing exercises that you not read them over for at least a week! Of course my "critic" re-read this blog post an hour after it was written and discovered an incomplete sentence!

As I read this over, I realize that it sounds like "the journey is its own reward" or some similar cliche. But it's more than that. She has pages upon heavily-illustrated pages that ask questions like what is playing? What are thoughts? What is self-consciousness? When did you stop drawing pictures, and why? There are also exercises adapted from her writing workshops, so there are specific things you can do with this book. But overall, it seems more like a primer on trying by not trying, on seeing the extraordinary in the ordinary, on discovering (or rediscovering) the wonder of your own creativity.

I feel lucky to still have some of that sense of wonder, especially with music - when I write a new song and record a simple demo, I will listen to it over and over, amazed that this little collection of words and harmonious sound structures, which didn't exist yesterday, now does exist. Maybe it's good, maybe it's not, but it's still amazing, and I sometimes even experience that "floaty feeling" that Barry describes from her childhood (for her it came from drawing lines on paper and having them become something).

I think I need to try drawing again too!
Posted by FlyingSinger at 8:46 PM