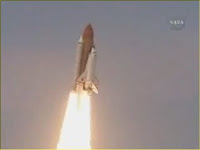 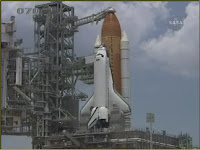 I've got NASA TV playing in the background, and it looks like a beautiful day to launch Atlantis at KSC. The countdown seems to be going well, and the long-delayed final Hubble service mission should be underway soon.

Alan Boyle at MSNBC Cosmic Log has a nice article on "Hubble's New Superpowers" - "superpowers" to be made possible by two powerful new instruments the STS-125 astronauts will install, along with the repairs that will return malfunctioning instruments to original performance or better. And Paul Gilster at Centauri Dreams discusses the enhanced observations that will be made possible by Hubble's upgrades.

UPDATE: Great launch! The Hubble chase begins - I'll have to try out the launch and rendezvous tonight in Orbiter. It will take the astronauts until Wednesday afternoon to catch up with HST, but I have time acceleration...
Posted by FlyingSinger at 1:09 PM