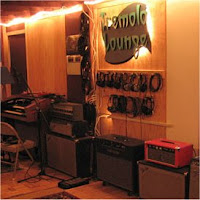 I'm starting to do serious recording to finish up a new album I'm planning to release later this year. It's probably going to be called "Message from Tomorrow," and that's the song I recorded yesterday with my amazing producer, Roger Lavallee (the song was written with my friend Rob Simbeck in 2006). I walked into the Tremolo Lounge with a simple acoustic demo at 10:30 am and in less than six hours, Roger and I (mostly Roger!) turned it into what I think is a really cool pop-rock recording.

It's amazing to watch Roger work. First he does a simple "click track" from my rough demo. Then I play and sing a scratch track to set up the song structure, and Roger goes to work creating crazy, dynamic drum parts on his Mac screen (he uses ProTools with many plugins, effects, samples, etc.), with some help from a small MIDI keyboard. I play a simple organ part. Roger grabs a bass, runs through the song once to work out the part, records a great first take, punches in a few small fixes, done. Move on to guitars, parts that don't sound at first like they could work - but when everything is assembled... they sound great! Then we move on to vocals (all mine), with the basic harmonies I had worked out, plus some cool background parts on the bridge that Roger figured out and taught me to sing in about 20 minutes. Mixing and effects are pretty much continuous during the whole process, but we spend some time at the end tweaking things, and I suggest a harmony part for the guitar solo Roger had played - it takes about 25 minutes to work out and play - nice!

The effects and the mix are not quite final, but I put it up on Garageband.com to get some feedback (I entered it in the "rock" contest then realized I should have called it pop-rock - but too late - oh well). Check it out if you would like (it's streaming only). I'm pretty sure this is the first song in history to mention both Mars and Ashton Kutcher (not to mention Seinfeld). Lyrics:

Immortal afterthought:
Upload my mind to a robot
New realms of virtual pleasure
And titanium joints forever!
Seinfeld in syndication
In my motel room on my Mars vacation