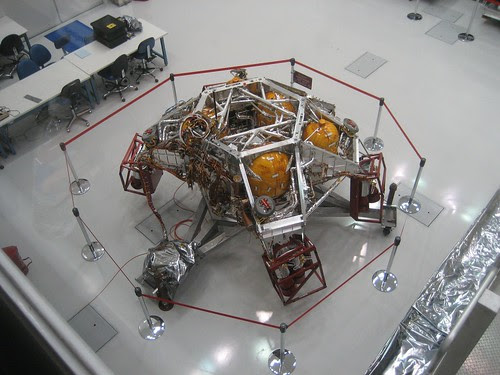 As I have now mentioned several times, I spent all day Saturday at JPL's Open House. Since I knew I would be "working" from 1:00 to 5:00 pm (as a volunteer Solar System Ambassador, not as a JPL employee), and since I didn't know how crowded it might be, I gave myself one mission for the morning - to see the Mars Science Laboratory (MSL) rover in the large assembly clean room. I figured this might be my only chance to see this flight hardware before it goes to Mars (though it's now planned to launch in 2011, so I could probably see it next year too). It turned out that my wife and I were the first to arrive at building 179, and we got a real good look at the subassemblies and talked a while with the JPL guides there. The picture above is of the big rocket platform that will slow MSL to a hover and gently lower the rover to the surface in "skycrane" fashion. 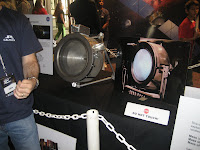 Since it was not really that crowded, I was actually able to see just about everything I wanted to see, with the exception of a couple of movies that had long lines. I saw models, sample hardware, pictures, and video from various past and future missions (Galileo, Dawn [ion engine shown here], Spitzer, Kepler, GRAIL, Phoenix, Cassini, Mars Pathfinder, Explorer 1, and more, in no particular order). I got to talk with JPL personnel on several current and future missions, including several MER Rover drivers, as well as Dr. Fuk Li, Manager of Mars Exploration Programs, a really interesting and nice guy. I also saw a number of research and development robots. 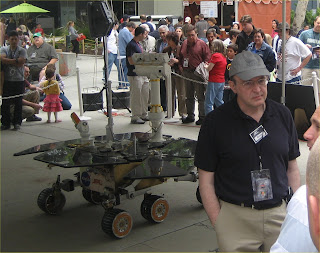 But the main event for me was the four hours I spent hanging out in the Mars Exploration Program area, answering visitors' questions about Mars and especially about the MER Rovers, Spirit and Opportunity. I and the other volunteers were helped in this by "Bubba," the MER Full-Scale Mobility Test Vehicle. Bubba was rolling around my end of the Mars Program tent under the control of software on a notebook computer which was in turn controlled by several actual Rover Drivers from MER Operations. In spite of this control system, Bubba would sometimes "sneak up on me" as I was talking with some visitors - someone would say "moving rover behind you," and I would be surprised to see it back there. I think having this moving rover coming close to the fence was a major part of the appeal. The other cool thing was the way it could climb over a rather large "Mars rock" placed in front of its wheels.

Visitors had all sorts of questions, from very general ones (what is that?) to very specific ones (what technology is used in the MER solar panels? they are high-efficiency, multi-layer, gallium arsenide/germanium solar cells) to some that no one could really answer (how much longer will the MER Rovers survive?). I was able to answer almost all of the questions I received and also share with the visitors information about NASA's overall Mars program strategy ("follow the water" and so on) as well as some interesting stories I had learned in my readings and from volunteers who have worked on MER. Since there were usually three or more people answering questions, I could really take as long as needed with each visitor or group. Some of them stayed for a long time and asked a lot of follow-up questions. There were a lot of excited kids, but also a lot of adults who were glad to be able to ask a whole series of questions. Many found this Mars stuff to be more interesting than they expected in one way or another. 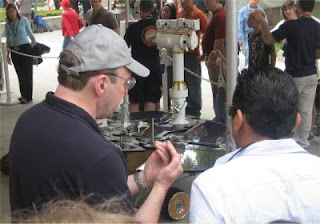 Doing this was really fun, and having a life-size, realistic-looking, and moving Mars Rover was an even better "prop" than Orbiter for engaging people about "space stuff." I think I need to get me one. Or at least come back next year and do it again at JPL.

UPDATE: Clifford Johnson of Asymptotia came to the JPL Open House on Saturday and wrote a nice post about it here. He also took a video with brief clips of several of the exhibits, and he happened to catch me at the start of the video, talking and pointing at the Mars Rover (0:10 to 0:18).
Posted by FlyingSinger at 12:39 AM

This reminds me so much of my trip to JPL just before they took Spirit and Opportunity to Florida for launch. Got to see both rovers, though from a distance, and what a thrill to think they're now continuing to set records on Mars! Wonderful place to visit, JPL, and thanks for bringing back that feeling.