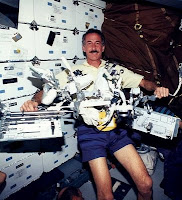 I just read a cool interview with Jeff Hoffman that Nancy Atkinson did a few days back on Universe Today. Dr. Hoffman was one of the mission specialists on the first Hubble Servicing Mission in 1993 (STS-61). He actually installed the WFPC2 camera that just came back to Earth with the STS-125 crew.

Dr. Hoffman is also one of those "people I should have known at the time" - a slightly embarrassing story. Back in September 2006, I attended a NASA-sponsored education conference (NESSIE, New England Space Science Initiative in Education). This was held at the Boston Museum of Science and was attended by a number of space science and education professionals (and a few informal educators like me). At one point, we broke up into small groups to discuss some assigned topic to be reported later to the main group. I forget the exact topic of our group's discussion, but I think it involved how to use space topics to engage students. I do recall that there was a soft-spoken MIT professor in our group by the name of Jeff Hoffman. It was only later when I reviewed the list of attendees that I realized he was that Jeff Hoffman, five-time space shuttle flyer and Hubble repairman. He modestly neglected to mention this small bit of personal space history to our group.
Posted by FlyingSinger at 10:36 PM