Beating NASA Back to the Moon... 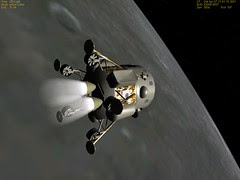 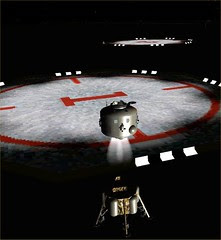 ...virtually, of course. I've decided to try my own "back to the Moon" program using Francis Drake's CEV-1 add-on, especially since I found that LazyD's Land MFD works great with this "tail sitting" lunar lander. It brought me hands-off from lunar orbit to pad-1 at Brighton Beach. Not much challenge in that, you say? True, but without a landing autopilot, a tail-sitter with only a main engine is not something I'm ready for. Plenty of other challenges in this, including planning (with IMFD) the whole Earth to the Moon thing for the CEV-CRM (if that's what it's called, command & resource modules), rendezvous in lunar orbit with the separately launched CEV-LM (making sure the resulting orbit is in reach of the desired landing spot), land (easy now), then take off with enough fuel to rendezvous with the CEV-CRM.

In my test launch from the Moon, I ended up with 6% fuel in the CEV-LM ascent stage, and not in a very good orbit to dock with the CEV-CRM. I need better planning (it's all in the timing), because in the test scenario, the CEV-CRM only has 33% fuel itself (after LOI burn), and I don't know how much is needed for TEI (trans-Earth injection burn).

So all the needed parts are there, and I can even install some of the Apollo 3D terrain "bases" for more realistic landing sites (I don't think there will be pads and a control tower for the first few flights). This will familiarize me with the CEV game plan and brush up some of my rusty orbit sync/dock skills. The hardware looks a little different from the current concept - but even that is still artists' conceptions. I think it looks kinda cool.
Posted by FlyingSinger at 10:21 PM

Nice set of pictures Bruce. Man, I feel like a real slowpoke with Orbiter! After over a month I still can barely make it to LEO, while so many newbies (not including you in that group, Bruce ;-) ) reach the moon in a matter of a few days of game!

Oh well, guess that's what I deserve for spending too much time on small details ...

Hey, if exploring small details is what interests you, that's cool. There are plenty of people who buy space books and videos to delve into the details of the Apollo program or whatever their interest. In Orbiter, you can learn about the switches in the CM or LM -- then use a near-original checklist to fly a simulated mission where you have to flip those switches in the right order as part of succeeding in the mission. I love the books and the videos too, but there's knowing, and there's doing, and "doing it" is a strength of Orbiter.

Besides, there's no space race in Orbiter, it's whatever you want to do with it, whenever you want. I spent a LOT of time with Orbiter the first couple of months, and I tried a lot of things, just my approach. But I still skipped a lot of things - I've done very little with Earth re-entry and landing, and some users spend hours on that alone, getting good and precise at it.

That's one of the things I like about Orbiter, and in fact I was thinking of a post on a related subject, maybe later today.