My Other Car is a Corellian Freighter 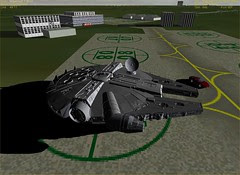 Ever wonder what happened to the Millenium Falcon? Turns out it was sold to a nice young couple from Encino. Here they are on a stop at the Cape where they've just unloaded... their Corvette? This is an updated Orbiter add-on by filozofio, based on earlier work by several others (credits in PDF file). Nice work - fun stuff. The Corvette (driveable) and R2d2 in the cockpit are nice touches. More pix over at Flickr (click the picture above).

I was going to come back to the near future and start some serious Moon flight planning for the CEV-1, but I decided to have another glass of wine and watch 12 Monkeys instead. See, it's not an addiction.
Posted by FlyingSinger at 8:06 PM