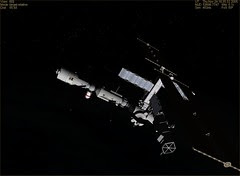 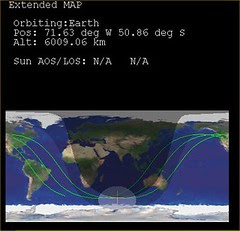 Orbiter users quite often post really cool stuff in the forums, news of new add-ons, rumors of new releases, and sometimes a connection with real-world spaceflight. Recently "David413" posted a new add-on model of the ISS (International Space Station) in its current form (the default ISS in Orbiter is the future completed version). He included in this zip file three scenarios with up-to-date ISS orbital elements for November 24, 25, and 26 (the last few days) when the ISS was in one of its periodic "constant sunshine" states (when the positions of the ISS, the Earth, and the Sun result in the Sun being visible from the ISS at all times for several days, even when it is above areas of the Earth that are in darkness).

I installed the "new" ISS and ran the sunshine scenarios, and I also installed Radu Poenaru's "extended Map MFD" for the occasion (available at www.avsim.com, file mapmfd.zip). This add-on MFD shows multiple orbits as well as the sunlit areas of the Earth on an enhanced color map. In the pictures shown, you can see that at 1835 UT on November 24, the ISS was over the south Indian Ocean and was fully illuminated by the Sun. The MFD shows that the Indian Ocean region itself was in darkness. Pretty cool - orbital mechanics works!

Note that getting accurate ISS positions like this requires creating a scenario with updated orbital elements available from NASA. Harmsway explains how to do this here. The ISS elements are not automatically updated by Orbiter (which means that the position of the ISS in Orbiter does not closely match the real ISS by default).
Posted by FlyingSinger at 4:58 PM