A Moon of One's Own 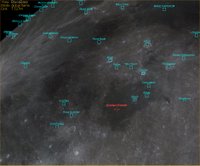 I really don't know the Moon very well. I looked at it tonight with binoculars, a brilliant first quarter Moon on clear New England evening, right from my front porch. In Orbiter, I've been orbiting and landing on the Moon frequently since April, and I turn on surface labels now and then, wondering what some large crater might be. But I don't retain much.

Then in the binoculars tonight, it hit me - it does look like Wilma Flintstone! Not the whole thing, but a certain cluster of "seas" to the right of tonight's mid-Moon terminator. This is something that Bruce Mattson of the Christa McAuliffe Center points out in an article on their web site. He noticed that it is hard to distinguish the superficially similar features of the Moon, but with the help of the Wilma image, you can begin to see some patterns. I won't steal any more of Bruce's thunder - but check out the article, it's cool.

And speaking of of "Bruce" (which happens to also be my name), guess what is right in the middle of Wilma's lovely mouth (Sinus Medii, actually)? Bruce Crater! What a great name for a crater, but it's probably named for Lenny Bruce, not me. And the location? Very central, 0.4° East longitude, 1.1° North latitude, 7 km across, 800 m deep. I added a Moon base there in my honor (and so I could find it easier). Bruce Crater and Wilma Flintstone now form the core of my own personal Moon feature awareness program. Bruce Crater is only about 50 km from the landing sites of Surveyor 4 and Surveyor 6 (the red symbols on the Orbiter screen shot). I thought you should know.
Posted by FlyingSinger at 5:23 PM