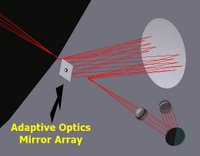 When I was a space-obsessed kid, I figured that if I couldn't someday be a military pilot and an astronaut, that I would at least end up being an astronautical engineer. But instead I majored in physics and later became an optical engineer, working mainly with optical design software. It's a long story, but the good news is twofold. First, optics has provided a diverse and enjoyable career. And second, there's a lot of optics in space. I've had some connection to many space related optics projects, through my company and through our customers, including many NASA and aerospace company engineers I have supported and trained over the years. Some examples of optics in space:


And even carbon nanotubes have an optical side - a recent report indicates that under some conditions, single-walled carbon nanotubes can emit very bright and tunable (1-2 micrometer wavelengths) infrared light.

Posted by FlyingSinger at 12:28 PM