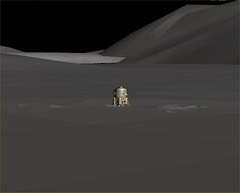 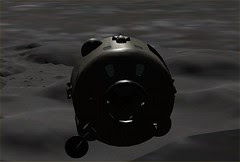 I'm getting back to my CEV "Back to the Moon" practice mission, setting some things up to simulate NASA's planned mission profile. As I understand it, a heavy-lift launcher places the unmanned LSAM (lunar surface access module) along with a "departure stage" for TLI (trans-lunar injection, pretty much using the old Apollo terms) in a parking Earth orbit. The manned CEV is launched separately, and it soon docks with the LSAM in Earth orbit. At the right time, the CEV/LSAM/departure stage stack makes the burn for the Moon. There's more, but from here on, it pretty much follows the old Apollo Moon landing plan. I'm using Francis Drake's "old" CEV add-on, which doesn't have the very latest projected CEV shape but is quite cool.

Good things: I docked the CEV with the LSAM in LEO (don't we love our TLA's! OK, one FLA). I installed a Taurus-Littrow 3D terrain "base" (by jtiberius) to have an interesting place to land (but didn't actually land there yet). I edited scenario files to put the LSAM at this base and practiced taking off for lunar orbit (the LSAM either floats about half a meter above or sinks a little into the 3D mesh for this terrain - not sure if this is fixable).

Not-as-good: I couldn't run the edited scenario to dock the LSAM with the CEV-upper stage stack (not sure why). LSAM has the up-is-forward confusion of many tail-sitter spacecraft, so docking is tricky (both view and controls). Landing would be tricky too except for the Land MFD. No docking port frequencies so docking is all visual (no MFD help). Actually should have the LSAM on a different booster. A few minor problems but it pretty much works.

This is all preparation for a full-up CEV/LSAM Earth-Moon mission soon. More things to figure out, but it's going OK. More pix on Flickr.
Posted by FlyingSinger at 11:11 PM