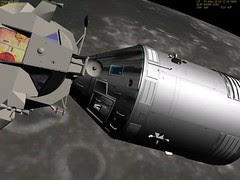 I've decided to start writing brief overviews of some of the many Orbiter-related web sites that are out there. Orbiter is freeware and has no official support, but between the forums, the add-on sites, and the web sites of many individual Orbiter users, the total available support is really quite extensive.

John Dunn's Orbiter site is a case in point. It focuses with incredible detail on flying Apollo missions using the NASSP add-on. It includes historical background on the real activities of each of the 17 phases of a full Apollo mission, followed by detailed instructions for the Orbiter procedures, including many screen shots and at least one video (lunar descent, stream or download). Although I have not yet done a complete Apollo mission myself (only selected parts), I have read through John's tutorial and used it as a reference to understand the "why" as well as the "how" of the many Apollo mission steps. It's quite an impressive document.

The tutorial dates from 2003 and thus is based on earlier versions of Orbiter and NASSP (Orbiter 030303 and NASSP4, while current versions are 050216 and NASSP 6.4.2), so there may be some changes in some details of how these missions are flown. For example, the tutorial refers to the Lunar Landing MFD (LM autopilot), and I have only used the more recent Land MFD when I have done practice Moon landings, so I'm not sure if the earlier MFD is still supplied or still works with the latest NASSP. But I have not found a more detailed tutorial on flying Apollo in Orbiter, and I believe it's worth reading if only to gain an appreciation of the scope and detail of these missions.

Speaking of impressive documents, John's site also includes a page with downloads of many official publications from the Apollo era, including the 56 MB PDF "NASA Apollo Command Module News Reference" from 1968.

The picture is my own shot from a recent Apollo 10 flight - just some lunar orbit docking practice. But someday I will fly a complete Apollo mission, and John's tutorial is already in a three-ring binder ready to guide me through the zillion steps to the Moon and back.
Posted by FlyingSinger at 8:57 PM

Lunar Landing MFD still works with NASSP 6.4.2..I prefer it to Landing MFD because it lets you fly all the way down, and it allows for a greater variation of initial offplane distance